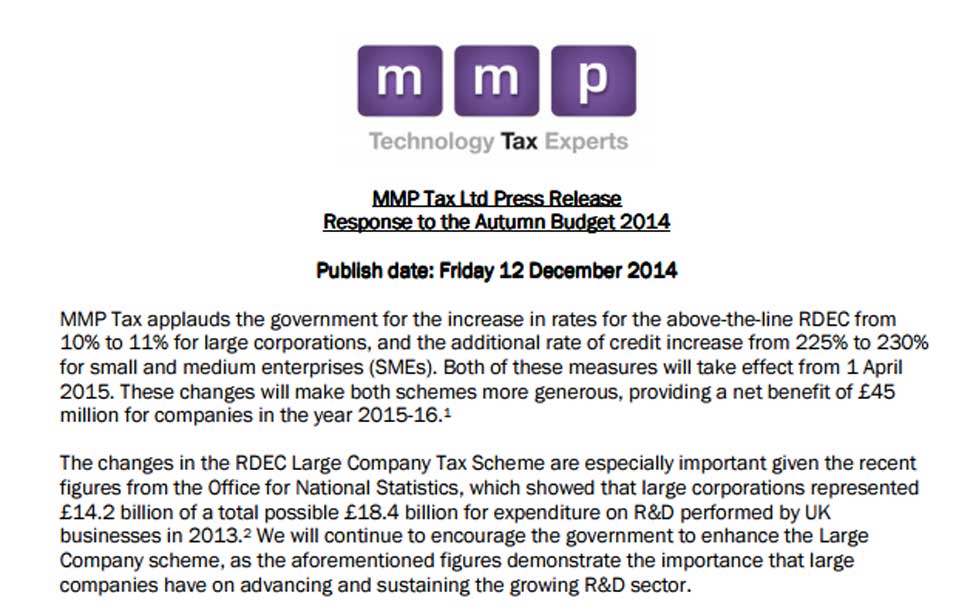 MMP Tax applauds the government for the increase in rates for the above-the-line RDEC from 10% to 11% for large corporations, and the additional rate of credit increase from 225% to 230% for small and medium enterprises (SMEs).

Although the Chancellor's investment decision is a positive step in the right direction, there is no room for complacency, and MMP will continue to encourage the government to increase their total level of R&D investment.

Elsewhere, we fully support the introduction of an advance assurance scheme for small businesses making their first R&D tax credits claim. Small, emerging companies are essential to the growth and progression of the technology sector; however, as previously mentioned, the real driving force for UK R&D and UK innovation are large corporations. We urge the government to introduce schemes and net benefit increases on current Large Company schemes, with the view of incentivising multi-national corporations to locate in the emerging UK market 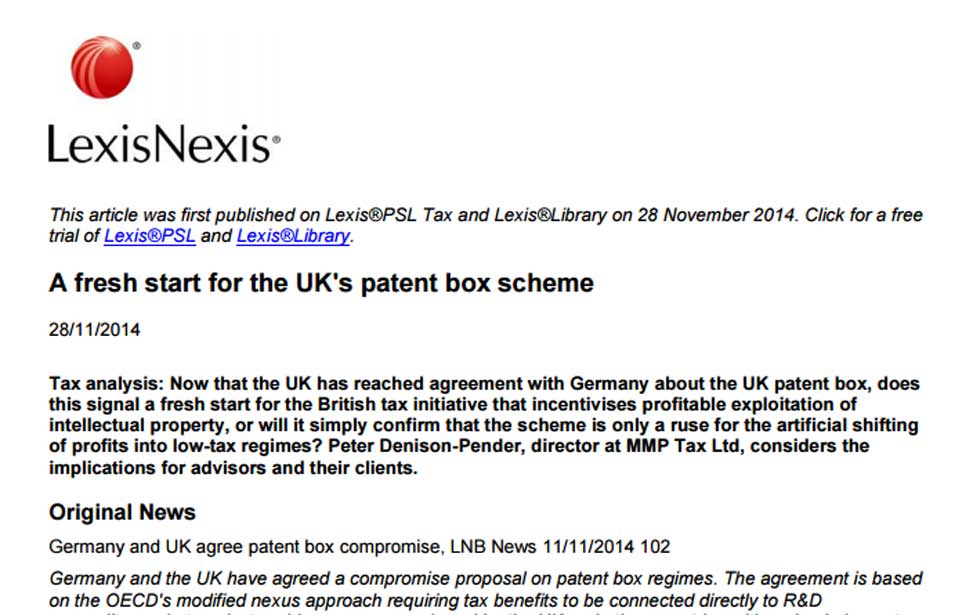 A new dawn for the UK's patent box scheme

A fresh start for the UK's patent box scheme

Now that the UK has reached agreement with Germany about the UK patent box, does this signal a fresh start for the British tax initiative that incentivises profitable exploitation of intellectual property, or will it simply confirm that the scheme is only a ruse for the artificial shifting of profits into low-tax regimes?

This article was first published on Lexis PSL Tax and Lexis Library on 28 November 2014. 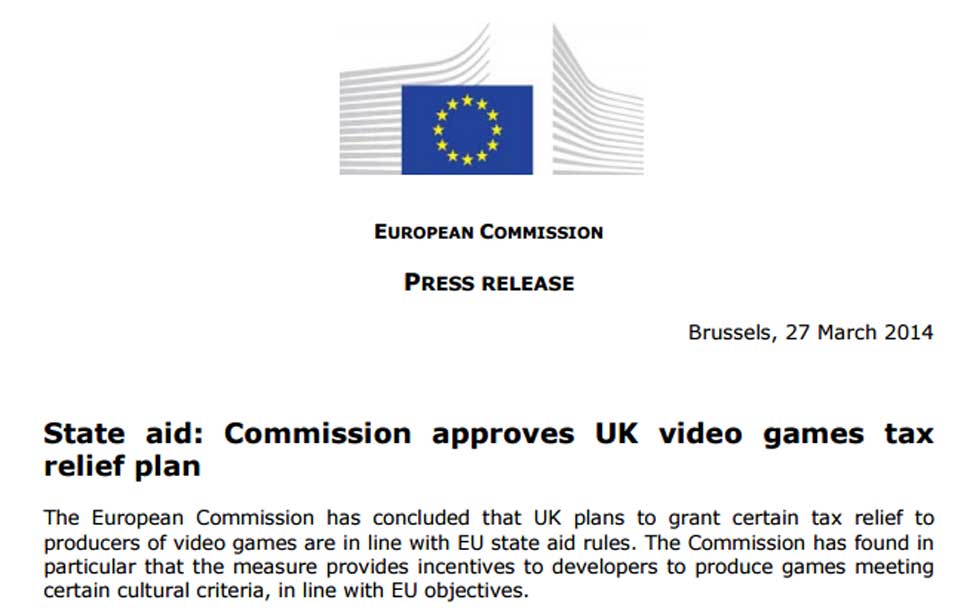 MMP Tax is delighted to note that the UK proposals for Video Game Tax Relief have been given full state aid approval by the European Commission on completion of its investigation into the UK's proposals.

MMP has been involved in recent years in lobbying for the relief, in partnership with industry groups such as TIGA. Today's announcement is a tribute to the perseverance of TIGA and its leader Richard Wilson. TIGA has campaigned relentlessly for the last seven years and now sees the fruits of its hard work.

Dr Richard Wilson, Chief Executive of TIGA, stated:"TIGA's focus is on strengthening the games development and digital publishing sector and so our top priority for the last seven years has been to fight for the introduction of Games Tax Relief".

Many games businesses will benefit from engaging skilled tax firms to fully profit from the Relief. TIGA has worked closely with MMP over recent years and we value our relationship with them. The MMP team are approachable, knowledgeable and highly successful. TIGA looks forward to working closely with MMP in the years ahead as we both work to drive the games development and digital publishing sector forward.

Oli Christie, Chief Executive of Neon Play Ltd, an award-winning independent games developer for mobile and tablet apps: "We have been investing in great people in this terrific industry so help from the government in supporting us to do this is really important. We have used MMP for our R&D tax work and they have been active in promoting this new regime and supporting us. It’s good news for us and the industry as a whole." 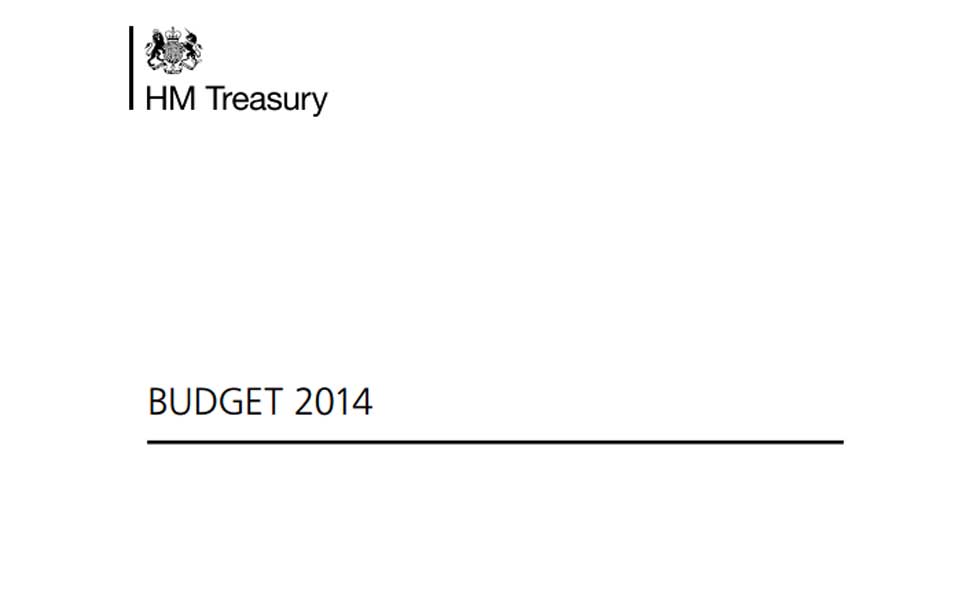 MMP Tax welcomes the Chancellor's decision to increase the payable R&D Tax Credit rate for loss-making SMEs from 11% to 14.5%.

The R&D Tax Relief scheme is a cross-party governmental success story of recent years. Introduced by Labour and enhanced by the Coalition, last year the number of claims for R&D Tax Relief rose by 16.5% on the previous year and accounted for £1.2 billion of support in reducing the cost of investment in R&D. £420 million of this was claimed by smaller businesses.

The fruits of this research can be seen in the promising growth figures emerging across the SME economy. The latest figures from the Manufacturing Advisory Service show that more than three quarters of SMEs (76%) expect to increase their sales in the first six months of 2014, while more than half of SMEs (53%) expect to take on staff in next six months (a figure which is 14% higher than the last MAS survey). 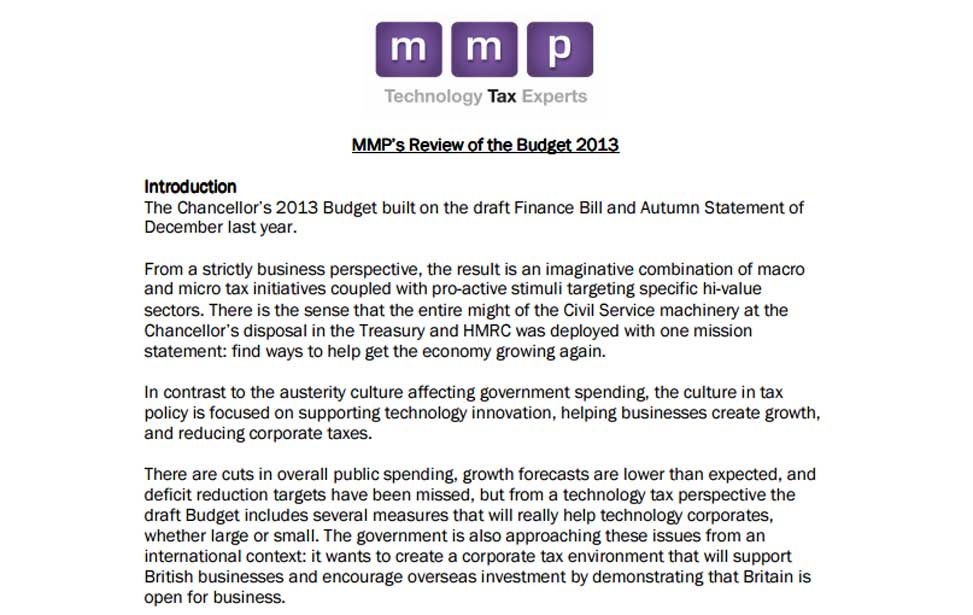 The Chancellor's 2013 Budget built on the draft Finance Bill and Autumn Statement of December last year.

From a strictly business perspective, the result is an imaginative combination of macro and micro tax initiatives coupled with pro-active stimuli targeting specific hi-value sectors. There is the sense that the entire might of the Civil Service machinery at the Chancellor's disposal in the Treasury and HMRC was deployed with one mission statement: find ways to help get the economy growing again.